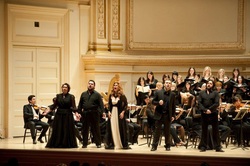 Adapted from the accounts of the nativity and the passion in the four Gospels, “Oh My Son” tells the timeless story of Jesus of Nazareth in a tableau style, through a series of scenes.  The work brings the humanity of the story to the forefront, emphasizing the emotions of each character and reminding us that, while we most often hear the story from a Divine point of view, all of the characters are, in fact, very human.  Though Jesus Christ resigns Himself to God’s will in being crucified, He is emotionally overwhelmed in the face of death and His Father’s seeming abandonment.  Mary, when tested with the death of her Son on the cross, struggles and suffers before coming to acceptance.  Crying out in agony that she cannot help the man who once saved her from a life of sin, Mary Magdalene is grief-stricken at the foot of the cross.  Even Pilate, before he hands Jesus over to the priests to be crucified, struggles between doubt and belief.  This is the story of the cross in all its many human dimensions—grief, betrayal, compassion, doubt, and faith.  But most of all, it is a story of a selfless and world-changing act of love.

Marcos Galvany has been called “a melody gifted composer” and “one of the most talented and passionate composers of our time” by world-renowned composer John Rutter.  With the New England Symphonic Ensemble, he has conducted his own compositions throughout the United States, Canada, Europe, Russia, Australia, South Africa, Mexico, Puerto Rico, and Jamaica. Galvany studied in Spain at the Oscar Espla Conservatory, where he graduated with a Bachelor’s degree in Piano Performance. He then studied composition in the United States at Columbia Union College (now Washington Adventist University), becoming the Composer in Residence there, and serving as the Assistant Conductor of the New England Symphonic Ensemble, which has performed more than one hundred times at Carnegie Hall. Galvany has received commissions from the New England Symphonic Ensemble, from the State of the Arts Cultural Series at the U.S. Department of State in Washington, DC, and from the Saint Albans and Washington National Cathedral Schools. Oh My Son is his first opera.